A Motivation for Decolonizing Statistics 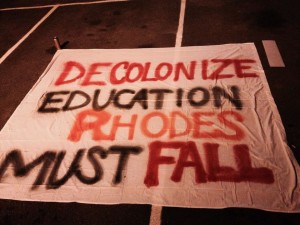 For a white middle-class, American, cis-gendered, heterosexual man like me, going through life doesn’t require much.

I am not required to think about my positionality, or why the world exists as it does. I am not forced to recognize my privilege, or to justify my importance in the world. I am not expected to question the ways in which the world is built to accommodate and benefit me at the expense of excluding and oppressing others. I am not supposed to ask these questions but, since moving to South Africa, they come incessantly. And once the questions start to come, no aspect of our still-colonized world is safe from interrogation.

Decolonization is questioning, disrupting and (hopefully) destroying these systems of oppression and privilege on both a physical and psychological level. This is a grass-roots project of education and conscientisation, but also, interestingly, an academic project. Universities worldwide hold a conflicted place in this discussion since academic spaces are definitively elitist and exclusionary, but also seek to cultivate critical thinking, supposedly for the benefit of society at large. These two conflicting objectives make critical self-reflection in academia difficult, however many academic disciplines are already self-reflexive about their history and position in the larger context of colonialism and oppression.

South African architects recognize, and take responsibility for the fact that academics at the University of the Witwatersrand designed Soweto housing with specific goals of repression and white supremacy in mind. Anthropologists can reflect on institutionalized de-legitimization of non-Western thinking as a tool for imperial monopoly over knowledge production. Why then is it difficult to believe that Statistics, Mathematics and other scientific disciplines also have colonial roots, were developed in colonial contexts and are used to further the neo-colonial mission of continued supremacy of the privileged at the expense of the oppressed?

This complicity in systems of oppression is rarely (if ever) an active decision, however to argue that scientific disciplines are spared from the urgency of interrogating oppressive practices and colonial history would be both naïve and dangerous. This argument is naïve because it is categorically untrue that science is objective and wholly unconnected to systems of oppression. The argument is furthermore dangerous because in the modern world we are taught to trust science implicitly, thus interrogation of scientific disciplines often needs to be facilitated by the same experts who benefit from the status quo. This is all the more reason dispel the notion of perfect, objective science and scientists. In fact, this type of interrogation is a modern day mandate: to fail to do so is to not acknowledge global history, and to be complicit in these oppressive systems.

Turning now to my experience in Statistical Sciences at the University of Cape Town, equally the content, the pedagogy and the culture of the discipline are complicit in perpetuating oppression, both physical and psychological. The inherited culture of Euro-centrism, erasure of non-Western statisticians and worship of the “founding fathers” of Statistics perpetuates the dangerous myth that the archetypal Statistician is a white European man and any deviation from that archetype implicitly means you will be a less good statistician. Furthermore, the ethically dubious applications of statistics from eugenics in the past, to racist crime-prediction algorithms of the present are never touched upon in current curricula giving a false impression of these techniques as “perfect”.
Additionally, because of all of the banks, insurance companies and investment firms who snap up bright-eyed statisticians from the department, there is strong capitalist pressure to teach applications which only relate to business, giving a limited impression of what problems a statistician can solve. This is just a small (random) sample of issues of complicity in colonial repression which I have experienced while studying Statistics.

I am sure that the University of Cape Town is not unique in this regard, as most of the problems are inherited rather than new issues. In fact, being in Cape Town, South Africa, UCT is less caught up in the academic industrial complex of incestuous peer-reviewing and preferential publishing which seems endemic to the “elite” universities of the West. Finally, I would like to problematize what I experience as a devaluation of dialogue and discussion in the sciences as a whole (and in Statistical Sciences) in favor of concrete solutions. Change is obviously the end goal of engaging on these types of issues (and my reason for writing), but I feel strongly that blindly searching for solutions without engaging critically and self-reflexively will not change anything. No one student or one discussion can come up with miraculous fixes. Decolonization is not a box to be checked while keeping all other aspects of university culture constant. Simply put we need to commit to engaging on these issues with a similar end goal in mind: a fully inclusive university space, and a decolonized Statistics.